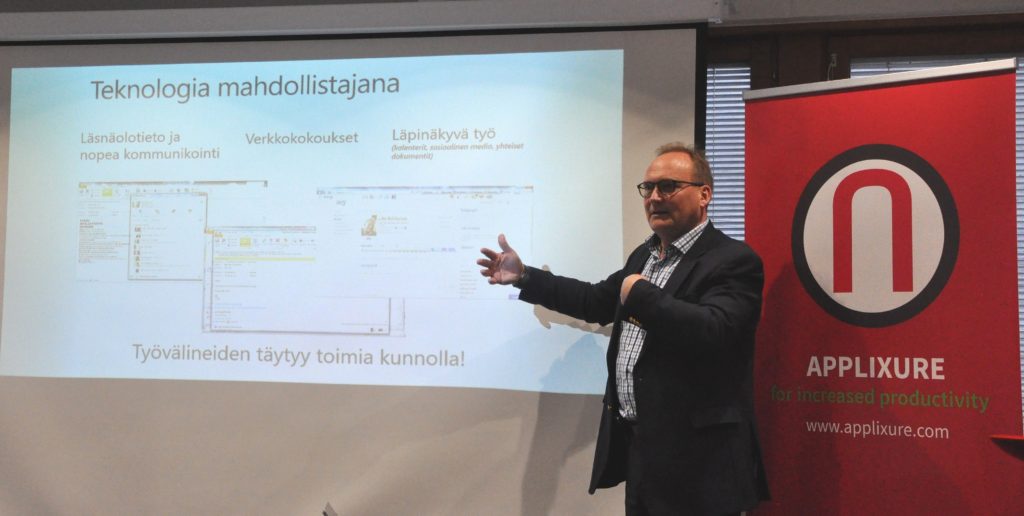 How will the shift toward knowledge work and a fully connected world change the future? These were the main topics at the first Applixure Symposium, held in Helsinki on 22 March 2017.

Applixure invited keynote speakers and IT industry professionals to meet and discuss topics relevant to both enterprises and the entire society. Common themes that ran across all presentations were transparency, productivity and the need to enable co-operation.

The presenters at the event included Ari Rahkonen (Senior Advisor and a professional board member), Tommi Eklund (Head of IoT and Offering and Development at Elisa Plc) and Harri Turtiainen, Applixure CEO.

Knowledge work is not done in isolation: we need to constantly communicate about our work and status to others, increasingly often across organizational borders. According to Ari Rahkonen, successful companies need to create a culture that supports transparency, which is needed to foster innovation and co-operation.

The topic of transparency raised a lot of discussion. According to the participants, transparency extends from public communication (through social media, for example) to partner communication and all the way to transparent business models. Technology is a factor, too, with security policies limiting the ability to share data outside company firewalls, for example.

A key part of a good environment are well-working digital tools that connect to the network.

Tommi Eklund: “Don’t let technology get in the way of people’s work”

Tommi Eklund’s presentation took a look at past, present and future technologies. Emerging technologies are adopted at an increasingly fast pace, though at the same time many of those technologies become transparent for regular users. One of Mr. Eklund’s points was that, in fact, one of IT professionals’ tasks is to ensure that technology never gets in the way of everyday life.

One of the blooming new technologies is IoT – the Internet of Things. In fact, the technology has already gained maturity quickly across the board, from dairy farms to smart machinery cutting down timber in a remote forest. The key thing is to understand how IoT and smart sensors, for example, really help boost your productivity – what data matters to you and why.

Elisa Ltd is a leading supplier of IoT services. According to Mr. Eklund, Elisa’s strategy is not to do everything on its own but rather to partner up with leading companies in the field. The need for co-operation calls for both transparency and openness, but also for the technical abilities for limiting access to networked data when needed.

After a look into the future of the connected world, Applixure’s CEO Harri Turtiainen turned the focus back to today’s workplaces and the lives of millions of employees.
“Studies show that each week, the average knowledge worker loses 4 hours of work due to computer problems. Many of these issues are not reported – IT managers do not know about the employees’ user experience with their PCs,” said Mr. Turtiainen.

Applixure’s solution allows companies to quickly assess the overall health of their PC environment and also to identify individual problems on workstations or laptops.

According to Mr. Turtiainen, transparency is one of Applixure’s design drivers. “Applixure enables transparency between companies and their IT service providers, for example. Both have access to the same data, presented in a visual, simple dashboard. Applixure allows both companies and service providers to take their game to the next level, resulting in better employee productivity and cost savings.”

Share:
Back to the front page
Sentient IT – artificial intelligence meets IT department
What your traditional software inventory solution does not tell you, final part